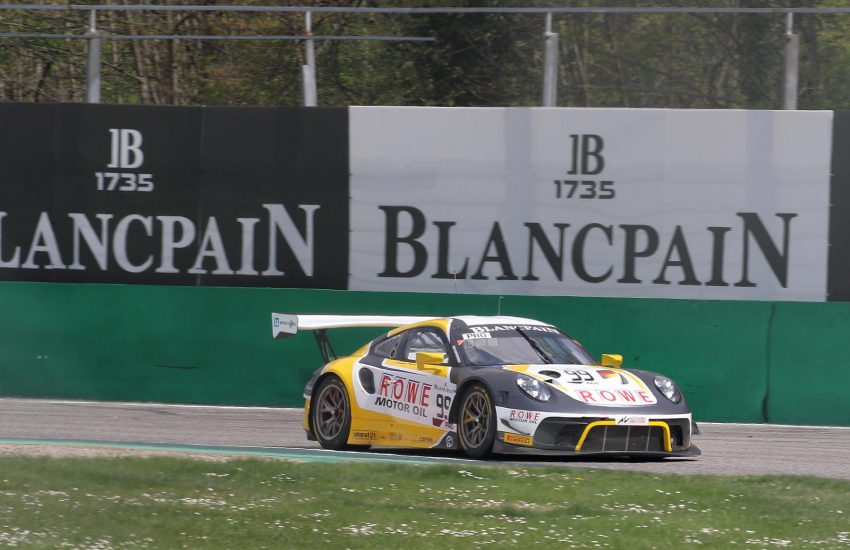 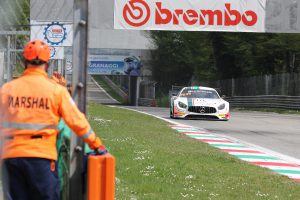 The Blancpain GT Series opened its 2019 season with a three-hour race at Monza, where challenging weather conditions made for a scintillating contest and produced a debut victory for Dinamic Motorsport with its Porsche 911 GT3 R.

It was a remarkable manner in which to open the new campaign, with emotional scenes in the Italian squad’s garage as Klaus Bachler crossed the line to seal the win. Here are some of the key stories that emerged from a busy weekend in Italy.
Dinamic’s triumph means that the past 10 Endurance Cup races have each been won by a different team, a run that stretches back two years. Eight brands have won during that spell, with only Audi and Mercedes-AMG securing multiple victories.

Dinamic’s overall victory is the third for Porsche machinery. Coincidentally, the first also came at Monza 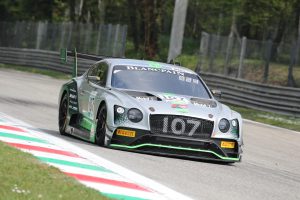 during the inaugural Blancpain Endurance Series round in 2011. The second, and until last weekend most recent, was at the Nürburgring in 2012 when the Prospeed Competition squad took top honours. Both of those successes came with a Porsche 997 GT3 R, while Dinamic was using the Stuttgart marque’s 911 GT3 R model.
Dinamic driver Andrea Rizzoli was visibly emotional during the post-race press conference. Though an experienced Blancpain GT Series campaigner, the Italian was contesting his first race in the Pro class last weekend. His previous successes include winning the 2014 Pro-Am title and a Silver Cup victory at last year’s Total 24 Hours of Spa. Zaid Ashkanani won on debut to become the first Middle Eastern driver to take overall victory at a Blancpain Endurance event. The 24-year-old has vast experience of Porsche Cup cars and put this to good use as he graduated to GT3 competition. His progress during the middle stint would prove vital to the squad’s eventual triumph. 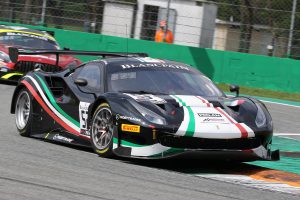 This was only the third time in Blancpain Endurance history that a car has won from outside the top-20 on the grid. Previously, the lowest starting spot for the winning crew at Monza was 18th in 2012. Though it was the #54 Dinamic-Porsche that took the chequered flag in first place, several cars led during the Monza contest. The #63 Grasser Lamborghini topped much of the opening hour from pole position with Mirko Bortolotti at the wheel, while the #90 AKKA ASP Mercedes-AMG of Nico Bastian also spent several laps in P1.

Jake Dennis put the #76 R-Motorsport Aston Martin at the head of the field during the second hour before being caught and passed by Raffaele Marciello in the #88 AKKA ASP Mercedes-AMG. The local ace was in turn overhauled by Sven Muller in the #98 ROWE Porsche, before Christopher Haase assumed top spot for the final stint. But, with just 13 minutes remaining, a puncture caused by debris on-track forced Haase into the pits and allowed Bachler to snatch the lead. The fastest lap of the race was recorded by Raffaele Marciello in the #88 AKKA ASP Mercedes-AMG, with the reigning overall champion setting a time of 1m57.368s on lap 41. The best lap of the rain-hit qualifying was recorded by Alex Riberas in the #2 Belgian Audi Club Team WRT machine, with a 2m02.379s putting the Spanish ace on top in Q3.

Garage 59 began its relationship with Aston Martin in solid fashion, with the #59 Vantage of Come Ledogar, Andrew Watson and Jonny Adam coming home in ninth spot after an eventful outing. The sister #188 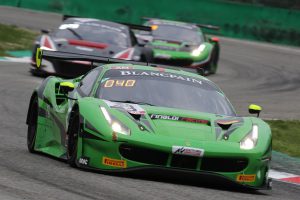 machine also secured a satisfying result, recovering from early drama in the race to finish third in the Am Cup class. Team co-owners Alexander West and Chris Goodwin drove the #188 as a duo at Monza, with regular partner Chris Harris unavailable due his TV commitments. The Englishman will be back for his home race at Silverstone.

Monza represented the first race in the history of the Blancpain Endurance category that did not feature Stephane Ortelli. The Monegasque driver is without a full-time drive this term but was present at the official pre-season test and could return to the cockpit later in the year.
This means that Alex Buncombe is now just one race shy of equalling Ortelli’s record of 41 Endurance starts. The Englishman made an impressive series debut for Bentley Team M-Sport, with the #108 Continental GT3 securing sixth at the chequered flag.

The Monza entry list was one short of its original 49-car contingent after the #27 Daiko Lazarus Racing Lamborghini suffered major crash damage during Friday’s pre-event test. The #17 Belgian Audi Club Team WRT and #20 GPX Porsche also withdrew after qualifying incidents, meaning 46 cars took the start of Sunday’s race. A total of 20 cars finished on the lead lap, while 40 were classified – an impressive number given the conditions. 38 of those were running at the chequered flag. 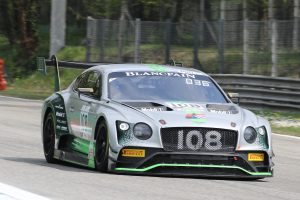 The Silver Cup class lived up to its pre-event hype, with several squads delivering extremely competitive showings. Most notable was the much-fancied #90 AKKA ASP Mercedes-AMG crew of Nico Bastian, Timur Boguslavskiy and Felipe Fraga, which secured second overall on the grid, led during the first stint, and eventually finished less than half a second off the overall podium.

The #6 Black Falcon Mercedes-AMG also clinched a top-five finish by following the AKKA ASP car home, while there was an impressive qualifying showing by the #78 Barwell Motorsport entry. The Lamborghini started P5 overall after a stellar qualifying that included Jordan Witt going fastest overall in Q2.
Barwell Motorsport remains the reference team in the Am Cup. Its class win saw the British effort place 16th overall and on the lead lap with its Lamborghini Huracan, the best overall finish for an Am Cup entrant since Team Parker Racing took 14th at the Total 24 Hours of Spa in 2015. It also beat its nearest challenger by two laps and finished ahead of the whole Pro-Am field. This represents Barwell’s third successive Am victory following wins at last year’s Total 24 Hours of Spa and the Barcelona finale.

Local ace Gabriele Piana pulled double duty at Monza, contesting the Endurance Cup as part of the #6 Black Falcon Mercedes-AMG crew and the supporting GT4 European Series round aboard the RN Vision STS squad’s BMW M6. The Italian enjoyed an excellent home event, taking P2 in the Silver Cup as well as a win and a runner-up finish in GT4.
There was further support action at Monza from Blancpain GT Sports Club, which saw Jens Reno Møller begin the new season with a brace of wins, as well as Formula Renault Eurocup. Two-time Formula 1 world champion Fernando Alonso was at Monza on Saturday to oversee his junior team, which is contesting single-seater category this season.
The SRO E-Sport Series also launched its season at Monza. Indeed, the virtual championship was staging its first-ever event, with contenders battling on-site and online using Assetto Corsa Competizione. Accomplished Polish gamer Kamil Franczak emerged as the winner and was celebrated on the famous Monza podium after Sunday’s Endurance Cup race. He will progress to the season finale at Circuit de Barcelona-Catalunya with Monza runner-up Nils Naujoks and third-placed Giovanni De Salvo. Round two will take place alongside the Blancpain GT Series weekend at Circuit Paul Ricard (1 June).

The next event on the real-life racing schedule will see Blancpain GT World Challenge Europe kick off at Brands Hatch on May 4/5. This will be the first half of a British double header, with the Endurance Cup resuming at Silverstone just one week later.
The Brands Hatch contest holds particular interest, as it will see the category formerly known as the Sprint Cup begin its new era as part of the global Blancpain GT World Challenge. A grid of 24 full-season cars is expected to tackle the event, with a pair of one-hour races taking place over the Bank Holiday weekend.