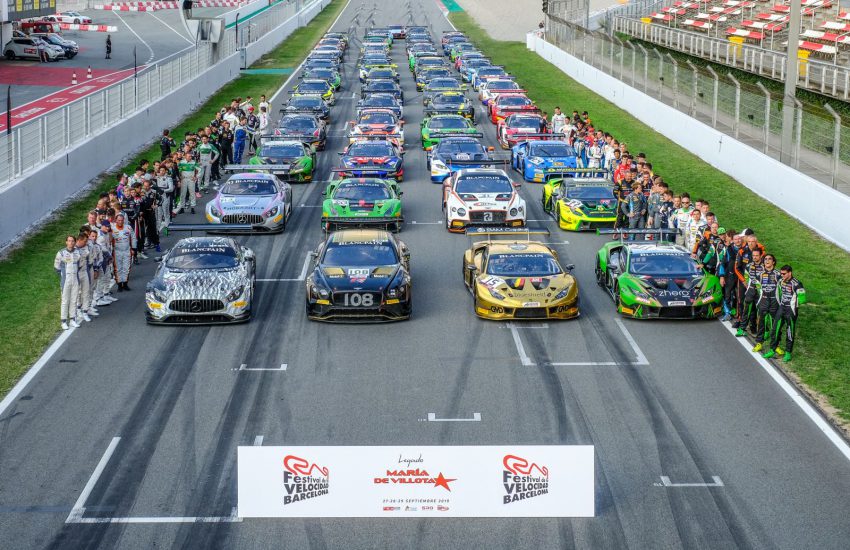 There was only one way that Orange1 FFF Racing could snatch the Endurance Cup title on Sunday afternoon: they had to win. With a 24-point deficit to the leading SMP Ferrari crew, they also needed Miguel Molina, Mikhail Aleshin and Davide Rigon to finish no higher than 10th at Circuit de Barcelona-Catalunya. FFF drivers Andrea Caldarelli and Marco Mapelli knew that this was a long shot.

But thanks to a superb performance by the two Italians and their super-sub teammate Albert Costa, everything fell into place. In a race that saw more than its fair share of action, the FFF crew remained serene out front. Once Mapelli had wrestled the lead from Luca Stolz it seemed that nothing could derail their incredible title charge.

It was a remarkable way in which to conclude the 2019 Blancpain GT Series. For the final time this year, here are the stories and statistics behind the race.

In terms of titles, Caldarelli is now the most successful driver in Blancpain GT Series history. The Italian has amassed four in total: two in the Endurance Cup, one in Blancpain GT World Challenge Europe and one combined Blancpain GT Series crown. He and Mapelli join Laurens Vanthoor and Maxi Buhk in completing the full set, though the Italians are the first drivers to sweep all three overall titles in a single year.

This represents the second season in succession that the Circuit de Barcelona-Catalunya race-winner has taken home the Endurance Cup title after the #4 Black Falcon Mercedes-AMG achieved the same feat 12 months ago. It is also the first time that a brand other than Mercedes-AMG has won an Endurance event at the Spanish venue.

Somehow, Black Falcon has ended 2019 without a title to its name. The Mercedes-AMG outfit has performed at a high level all year, taking pole and a podium at the Total 24 Hours of Spa and remaining in the hunt for each championship until the season-deciding race. Though they ultimately leave empty handed, their titanic battle with FFF has made 2019 a gripping campaign.

FFF’s maiden Endurance Cup victory means there have now been 12 winning teams from the past 12 races, a run that stretches back to the 2017 Total 24 Hours of Spa. Two drivers have triumphed twice during this period: Jules Gounon, who won Spa in 2017 and took top spot at the Circuit Paul Ricard 1000kms this year; and Albert Costa, who triumphed on home turf last weekend and was victorious at the 2018 Circuit Paul Ricard 1000kms.

Costa got the call to hop into the #563 Lamborghini during the middle of last week, receiving a message from the brand’s motorsport boss Giorgio San. The Spaniard was a natural choice to replace the unwell Dennis Lind given his high-level experience and knowledge of the Huracan GT3 from his current GT Open programme. Nevertheless, the pressure on his shoulders was enormous. Before the event, the Spaniard expressed his desire to return to the Blancpain GT Series full-time in 2020; the result of Sunday’s race will have strengthened his chances considerably.

This was Lamborghini’s fifth Endurance Cup win, drawing the brand level with Mercedes-AMG’s total in the series. It represented the Italian marque’s first victory since Silverstone 2017 and is the first to come from outside the Grasser Racing stable. Audi is now the top-tier brand on the longest winless run. Its last overall Endurance Cup triumph was at Monza in 2018.

A runner-up finish for the #76 R-Motorsport Aston Martin ensured that all of the seven brands competing full-time in the top-tier achieved a podium this season. Lamborghini led the way with four appearances, followed by Porsche on three. Bentley, Ferrari and Mercedes-AMG all scored two podiums each this term, while Audi and Aston both recorded one.

A third-place finish for the #107 Bentley Team M-Sport crew of Jules Gounon, Jordan Pepper and Steven Kane secured fourth in the Endurance Cup standings, just two points shy of the Black Falcon squad. Sunday’s charge from 12th on the grid was an impressive display from the Bentley Boys, with Gounon looking particularly rapid during the closing stages.

There was a stage during the final stint where it looked as though SMP Racing could fight its way back into contention for the Endurance Cup title. With 45 minutes left on the clock Miguel Molina had recovered to 12th, just three places shy of taking the crown from FFF. But making up positions is not easy at the sharp end of the field and Molina ultimately misjudged an attempt on fellow countryman Andy Soucek. The resulting collision landed Molina a drive-through and ended SMP’s chances once and for all.

Despite the Silver Cup class being more competitive than ever this term, AKKA ASP’s #90 Mercedes-AMG won for the third time in five races as the pre-season favourites lived up to billing. They secured the class teams‘ title by a staggering 143.5 points, while their drivers were 55 clear of their nearest rivals. In both cases, these represent the biggest winning margins of the Endurance Cup season.

Four Silver Cup cars finished among the overall top-10 at Circuit de Barcelona-Catalunya. The winning AKKA ASP Mercedes-AMG was fifth, one place shy of its best overall result of the season (P4 at Monza). The #6 Black Falcon Mercedes-AMG was seventh, followed by the #333 Rinaldi Ferrari and the #20 GPX Porsche. It took a bold move by David Perel to snatch a spot on the podium for the Ferrari and ensure a maiden rostrum finish of the Endurance Cup campaign for the #333 Rinaldi crew. This came despite an early stop-go penalty, which saw the car drop as low as 33rd overall.

Sainteloc Racing took an impressive Pro-Am win, despite fielding two rookie teenagers at Circuit de Barcelona-Catalunya. They were led by 18-year-old debutant Pierre Alexandre Jean, who was joined in the #26 Audi by 17-year-old Edouard Cauhaupé. Regular racer Pierre-Yves Paque completed the crew, which finished 11th overall to register the best result for a Pro-Am squad this season.

A second-place finish ensured that Oman Racing by TF Sport took home the title and completed a full set of podiums for the season. The Aston Martin squad secured victory at the Total 24 Hours of Spa after leading at the six and 12-hour marks, while also picking up two second-place finishes and two P3 results. They also captured three pole positions in what was a highly impressive season.

The Raton Racing by Target crew clinched its maiden Endurance Cup win at Circuit de Barcelona-Catalunya by taking Am Cup honours. The #29 Lamborghini of Stefano Costantini, Antonio Forne Tomas and Christoph Lenz had shown pace all weekend. Indeed, Constantini set the 17th-best time overall in free practice, beating several all-pro line-ups in the process. The win was especially sweet for Forne Tomas, whose hometown Girona is less than an hour from Circuit de Barcelona-Catalunya.

The #77 Barwell Motorsports Lamborghini suffered its first DNF in two seasons at Circuit de Barcelona-Catalunya, albeit with a second successive sweep of teams‘ and drivers‘ titles already in the bag. This was only the second time in two seasons that the crew did not finish on the class podium, the other being at Silverstone in 2018. The Lamborghini team has confirmed that it will return next year, with long-time driver Leo Machitski competing in either Pro-Am or the Am Cup.

The fastest racing lap of the event was set by the #4 Black Falcon Mercedes-AMG, with Maro Engel posting a 1m46.701s as he stretched his early advantage at the head of the field. Andrea Amici (#555 Orange1 FFF Racing Lamborghini) capped an impressive weekend by recording the best time among the Silver Cup drivers with a 1m47.297s. Tom Onslow-Cole (#74 RAM Racing Mercedes-AMG) was the top Pro-Am runner with a 1m47.386s, while Rory Penttinen (#488 Rinaldi Ferrari) led the Am Cup class with a 1m48.904s.

The 2020-spec Mercedes-AMG GT3 made an appearance during the private testing sessions staged ahead of the event. This was to assist with homologation and BOP for the new car, which will make its full competitive debut next term.

During the Barcelona weekend, a number of events took place in support of the Legado Maria de Villota movement, which seeks to continue the legacy of the late Spanish driver. Led by Blancpain GT Series stalwart Andy Soucek – a friend and former competitor of Maria – these included a charity dinner on the pit straight and a full-field photograph. All of the money raised was donated to Fundación Ana Carolina Diez Mahou, which supports children suffering from neuromuscular and mitochondrial diseases.

Though the 2019 Blancpain GT Series has concluded a number of dates remain on the international GT racing calendar. Blancpain GT World Challenge America wraps up its season in Las Vegas on 19-20 October, while the inaugural FIA Motorsport Games (1-3 November) will see several Blancpain GT Series regulars competing for gold in the GT Cup category. Two more major events will being the curtain down on 2019: the FIA GT World Cup in Macau (14-17 November) and the concluding Intercontinental GT Challenge by Pirelli event at Kyalami (21-23 November).