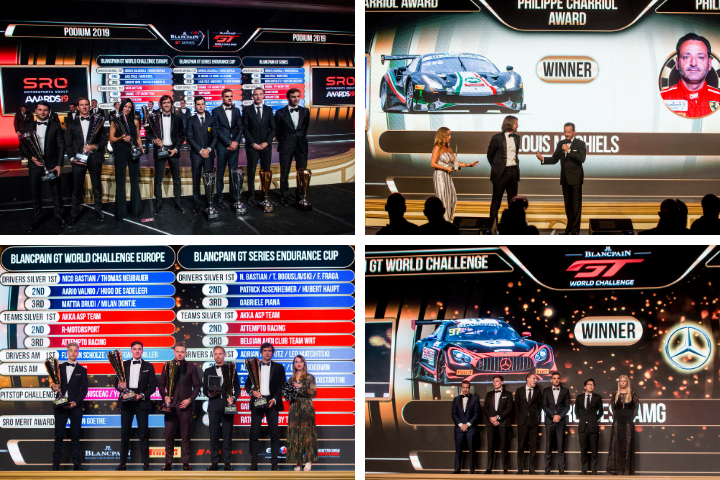 The stars of international GT racing were out in force on Sunday evening when a spectacular SRO Motorsports Group awards ceremony celebrated the top performers of 2019 at a lavish event in Las Vegas.

The annual prize-giving took place in the United States for the first time this year following the concluding round of Blancpain GT World Challenge America, which staged its season-ending contest at Las Vegas Motor Speedway.

Beginning with a gala reception and dinner at the world-famous Bellagio Hotel, proceedings then moved to venue’s famed Grand Ballroom where all of this year’s champions from a wide range of categories were celebrated. The leading lights of the 2019 Blancpain GT Series were among them, with successful drivers and teams recognised for their achievements in the Endurance Cup, Blancpain GT World Challenge Europe and the combined championship standings.

History was made in this respect, as Andrea Caldarelli and Marco Mapelli became the first drivers to collect all three overall titles in the same year following an incredible campaign for the Orange1 FFF Racing duo and their all-conquering Lamborghini Huracan.

It was a busy evening for the FFF Racing squad, which also picked up the overall teams‘ titles in the Blancpain GT Series and Endurance Cup, as well as the Pro-Am teams‘ and drivers‘ titles for Blancpain GT World Challenge Europe with Hiroshi Hamaguchi and Phil Keen. In fact, Orange1 FFF Racing missed out on just one of a possible six overall titles, a remarkable achievement that follows the Chinese squad’s graduation from a title-winning Blancpain GT Series Asia campaign last year.

Indeed, Sunday evening’s event saw many successes celebrated as a total of 15 Blancpain GT Series drivers’ champions were recognised for their efforts in 2019. Six teams took home trophies, with Lamborghini, Mercedes-AMG, Aston Martin and Ferrari all represented among the winners. Mercedes-AMG also captured the global Blancpain GT World Challenge title having emerged as the leading manufacturer across the European, American and Asian series.

It was not just the champions who were crowned at the Bellagio. Now in its fourth year, the Sean Edwards Trophy is awarded to a driver under the age of 21 who has shown outstanding attributes during the season.

Presented in memory of the 2006 FIA GT3 European Champion and chosen by the late racer’s mother, Daphne McKinley, this year’s recipient was GT4 European Series driver Clement Seyler, who captured the Am Cup title in his first full year of international competition. The Luxembourg-born rising star receives the Lalique Trophy and will be awarded 20 sets of Pirelli tyres to use next season.

The Philippe Charriol Award was presented to this year’s top-performing Gentleman Driver, Louis Machiels, who clinched three race wins and the Blancpain GT Series Pro-Am title in his AF Corse Ferrari. The SRO Merit Award, meanwhile, went to Benjamin Goethe. The youngest driver to compete in the championship during 2019, Goethe was just 16 when he made his debut at the season-opening Monza contest.

The winners of this year’s Total 24 Hours of Spa – the biggest GT contest in the world and the marquee event of the Blancpain GT Series – were also celebrated during the ceremony. The GPX Racing squad emerged victorious at the twice-around-the-clock classic, returning Porsche to the top step of the podium for the first time since 2010.

Finally, the TM Performance Pit Stop Challenge recognised the crew that performed the fastest stops during the 2019 Blancpain GT World Challenge Europe campaign. The rapid work of Orange1 FFF Racing secured the award to cap an incredible evening of success for the Chinese squad.

Though the majority of this year’s championships are complete, a further three international events remain on the calendar for 2019. Firstly, on 1-3 November the inaugural FIA Motorsport Games will bring together a diverse set of racers from across the globe to compete for national glory. Hosted by Rome and with the nearby Vallelunga Circuit staging the on-track action, this multi-disciplinary contest features categories for GT, Touring Car, Formula 4, Drifting, Karting Slalom and Digital competitors.

Finally, the Intercontinental GT Challenge Powered by Pirelli season finale will bring the curtain down on 2019 with the much-anticipated Kyalami 9 Hour (21-23 November). Reviving an event that traces its history back more than half a century, the long-distance contest will see the globe-trotting championship decided by a fifth race on as many continents.

Sunday evening’s festivities placed the emphasis on what has been achieved in 2019, a year that has seen SRO Motorsports Group solidify its presence on the American continent alongside firmly established series in Europe and Asia. It was appropriate, then, that the champions of the past season were celebrated in grand style in the U.S.